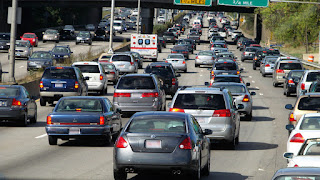 I was driving my wonderful SAAB the other day, tooling down the Sawmill Parkway in hilly Westchester County NY, accelerating into turns and just having a blast carving up the roads. As I looked in my rear-view mirror I noticed a car approaching at a rapid rate of speed.
He slowed enough to get on my a*s.
Gently tapping the brakes and  thinking that this signal would give him an idea that he was following too closely and hoping he would back off, instead he became enraged, started flashing his lights and honking his horn. He was a maniac. Traffic in the left lane prevented him from passing me, so he just decided that his best effort would be to tailgate. So I did what I could to stop him from his dangerous driving and slowed down. He just stayed on my tail, honking and flashing his lights.
I was getting angry, but at the exact same time that I was about ready to “go nuts”, I got a great new product idea that I probably would not have gotten had it not been for the present chaotic situation in which I found myself.
I don’t know where it came from or why: “What if I had an invisible strip on my bumper that was programmed with sign like, “you are too close, please keep your distance” that I could flash at him?
My very next thought was a series of questions such as: “Is there a market for this; how much would it cost to make; who would buy it, how could I sell it, and many other questions that marketing dudes ask.
I became so involved in this mental exercise that I completely ignored the jackass behind me who now, after several miles, decided to pass me, give me the one finger salute and speed off. “Yeah, same to you fella!”
So what’s the point of this story?
Here’s what I realized, and was able to articulate; “ Perhaps out of chaos, some anxiety and irrational circumstances, there may be a good idea that is fermenting and then rises to the top of your consciousness.”  And all we have to do is be aware of it.
Don’t discount the ideas you get when your business is flat or down, when it seems like the things you have tried just aren’t working; when your banker is stopping in more frequently and when the roof starts to leak in a new place.  That’s the place where the breakthrough idea can start. Necessity being the mother of invention.
And maybe, just maybe, there’s an idea there, inside of you, just waiting for the chaos to birth it.
SHARE
TWEET
PIN
SHARE