Frequently, I have written about the need to get better customers; by “better customers”, I simply mean not that they are better people, but the fact that they have more discretionary income to spend on leisure and entertainment.  This observation was made via many on site visits to location based entertainment facilities (LBE), whether they are bowling centers, FEC’s or merely birthday party venues.

So yesterday, while wrapping up some end of the year stuff, I came across some information from Randy White, CEO of White Hutchinson, (a world class entertainment consulting company),  To my glee, and to support my “marketer’s eye for observation, analysis and conclusions; there are actually empirical studies that have been undertaken and published.
Here are some observations from these studies:
·         In 2002, the highest 20% of income households ($95,000+ incomes) accounted for 44% of all Location Based Entertainment spending. It grew to almost half (48%) in 2011. However, household LBE spending has declined for all income groups with the highest ($95K+ income) group showing the least decline. Overall, the average American household spent 18% less on location-based entertainment in 2011 than 2002. 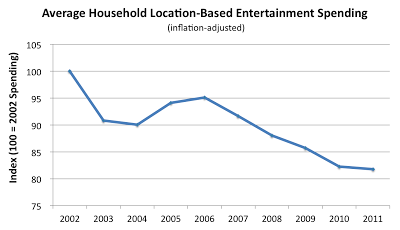 Declines were not caused by the Great Recession, but rather are a long term trend.
·         The overall participation at location-based leisure venues declined by 17% between 2003 and 2011. What this strongly suggests is that the decline in household entertainment spending is mainly attributable to declines in attendance, not per capita spending on visits. The greatest attendance declines have been with the lower socioeconomic households.
·         Middle income households, those earning between $35,000 and $90,000 spend approximately $358 per household annually.  Approximately 35% of these dollars are spent gambling) the number could be higher due to bias about reporting gambling losses.  (if they spent it all on bowling, that’s about two or three annual visits)
So what does this mean to you?
·         These higher income groups who are spending more money on entertainment have higher expectations, not just from a facility standpoint, but from a food and beverage perspective. They also view entertainment as a chance to socialize more with family and friends.  Perhaps it is time to look at that boutique set up to attract this higher demographic.
·         While lower income and middle income households are spending less, and this is a long term trend – not just attributable to the Great Recession of 08 – the bowling operator will have to continue to restructure pricing, take a hard look at the center’s amenities and long term capital needs to attract the “better customer” since many of these lower and middle income people have moved their dollars to gambling and stay at home activities like video games, Netflix and TV, etc…and with the exception of “low price offers” are spending less on bowling.
Something to think about for 2013.