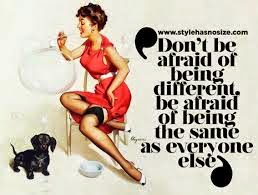 Sometimes you get pushed, maybe even a bit intimidated to fit in;  to look like everyone else, to “dress for success, so to speak, even if its really not who you think you are.  Maybe you even get pushed to use the same tools, the same format, the same analytic mindset as your peers, but hey, what if there is another way?

They are the high school English teacher in love with his one dimensional interpretation of “Huckleberry Finn;”  it’s  his way, as told to him by his teachers and his peers  Maybe its the book editor who has to subscribe to the strict rules of grammar without realizing the beauty in “other conversational grammar.”

Or maybe it was your first or second job when you questioned something only to be told, “Hey bud, that’s the way we do things around here and if you don’t like it, find another job.”

It didn’t matter that you might have had a better way to get the job done that would have either saved the company money or even made them money.

They’re all part of the “We know best school of management”. From the productivity guru who looks to make everyone faster, not necessarily better;  to the social media guru who is driving your project with what worked in the past and is not willing to tell you his new secret formula for fear that you might fire him rather than embrace his new strategy.

After all, haven’t I heard you say, “Where have you done that before? Did it work? Let me call the center?”

Maybe its a new idea and you’re the first?  How does that fit?  “Nope, you say, “I don’t want to be a pioneer. Pioneers get an arrow in the back and die. I want proof.”  Sure you do, but when are you going to step up and do something different that just might give you a bigger reward.

The safest thing you can do is keep doing what you have been doing, to fit in. “Hey I’m just doing what everybody else does, right?”

The problem is everybody else is just average and we have an abundance of average.

And have a happy, healthy and prosperous New Year

2 Comments on What’s So Good About Being Average?