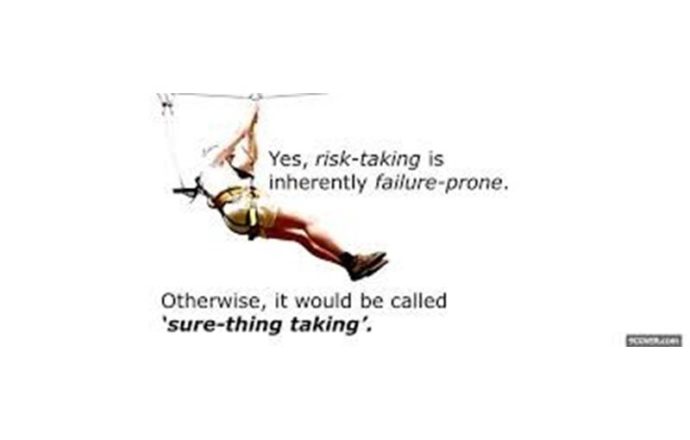 The Anatomy of Risk

Over the years I have consulted to hundreds of proprietors. The vast majority had taken my consulting; teaching and coaching advice and implemented highly successful programs, but some of them have viewed my recommendations as a “risk.”

When I asked why they didn’t want to implement the specific recommendation they had one of three answers as follows: 1) “It didn’t appeal to them”; 2) “It wouldn’t work in my market”; 3) We tried that before and it didn’t work.”

These were excuses. The real reason was that the recommendation was ONLY perceived as risk and in their mind risk meant failure.

This is risk mistake #1

In the real world, all change is a risk. These folks looked at ANY change as risk because their fundamental understanding was that what was perceived as uncertain was always risk… and risk ALWAYS meant failure.

If you told them that the chances of parachuting had a 1% chance of failure, they would completely ignore the 99% success rate and only focus on the 1% and, thus, never try it.

Risk mistake #2 is the person who goes into business, buys some real estate or some speculative stock and completely ignores the risk aspect of this investment and then is disappointed when the results didn’t meet his lofty goals. This risk blind individual is willfully (or ignorantly) unaware of what risk actually is about.

But if you’re going to move forward, you have to do something, (I.e. implement a new program, try a new digital strategy, make an investment in training, modernizing or advertising or even in the way your business model is built) and then be able to live with the possibility that what you do carries with it either of the two results.

The alternative is to do nothing.

And if you’re not doing something because it isn’t 100% guaranteed, then you’re moving backwards…fast.

After all, success isn’t always permanent and failure is only temporary.

So why not wake up every day and, at least, think about doing something…new?