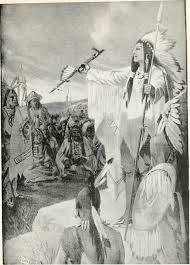 There was a period in my life when I became enamored with “old Native American” stories, also referred to as ‘“Indian folklore” that were passed down from generation to generation.  There were stories about Mother Sun and Father Moon and holes in the clouds; holes so big that the great spirits could peer down upon the humans and create their “life happenings”.  I was fascinated by these and couldn’t get enough of them.Their stories were everlasting because they instinctively knew several things about HOW to tell stories. For example:

No doubt your story, about your brand, your business, must capture the readers imagination, must motivate them to repeat their purchase and must, and more importantly, repeat your story to their friends and tribal community.Here is a story that an old Indian tells his grandson in hopes that his grandson will pass this on to his friends, and family:“Grandson,” says the old Indian, “there are two wolves inside all humans.  One is a good wolf and one is an evil wolf.”  “And they fight with each other all of the time. Every day.  Over many things,” the Grandfather continues.The grandson looks up at his old grandfather and says, “But grandfather, which one will win?The grandfather looks down and at his grandson lovingly and says, “Grandson, the one you feed will win.” What story will you tell to your tribe while sitting around your campfire?