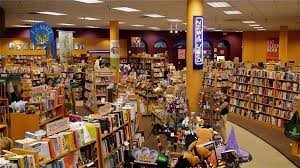 Hundreds of Barnes & Noble bookstores have closed since 1997. In the last five years, the chain has lost a billion dollars (or more) in market value.Last weekend I went into a Barnes & Noble bookstore with my two granddaughters to get them some books. I was surprised at the store and the employees.The book store looked a bit shabby and the employees walking around also were looking a bit shabby as well as “distant.” Now I know that B&N have been through some tough times, probably went through reorganization or two of some kind and have recently been acquired by a private equity firm. The private equity firm who owns the UK bookseller Waterstones recently bought Barnes & Noble. The Waterstones’ CEO, Mr. Daunt certainly has an immense challenge. In trying to describe the problems that Barnes & Noble faces, Mr. Daunt was quoted in the New York Times as describing the problem as follows:

“Frankly, at the moment you want to love Barnes & Noble, but when you leave the store you feel mildly betrayed. Not massively, but mildly. It’s a bit ugly — there are piles of crap around the place. It all feels a bit unloved, the booksellers look a bit miserable, it’s all a bit run down.”

Gee, I felt the same way. Maybe a lot of customers feel that also. In describing the problem this way, the CEO has, I believe, focused on the symptoms and not the causes. Sure, he could say that in today’s digital age, people prefer to read books on their E-devices, and that’s why they may come into browse, then go home and buy the book on Amazon, but this appears to be a symptom, not a problem. The lack luster appearance of the store and employees also seems to be symptom rather than the root problem.It’s tempting for a bowling proprietor or any retailer to say their problem is that they are not getting enough traffic into their establishment. That very well may be a fact, but that is merely a symptom.Too often, we try to solve the symptom by lowering our price or offering a “new” program. But these so called solutions aren’t addressing the real problem, I don’t think.For example, could the real problems be:

Maybe if we look at the real problems, we’ll stop chasing knee jerk reactions to the symptoms. But that takes work.Are you ready to keep digging until you discover the REAL problem(s?)